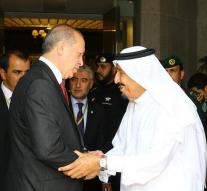 dubai - Turkish President Erdogan started Sunday on his two-day trip along some Arab countries, hoping to establish peace. He arrived in Saudi Arabia on Sunday afternoon where he met King Salman.

Together with three other countries, Saudi Arabia has broken all ties with Qatar because this Gulf State would support international terrorism. Doha denies that. Turkey is an ally of Qatar and has now also sent troops.

The four Arab countries want, among other things, that Qatar impairs its relations with Iran. Erdogan is also going to Kuwait and Qatar.