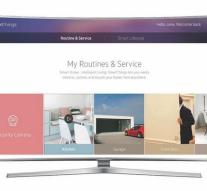 - All smart TVs that Samsung launched in 2016 to connect to the Smart Things platform of the company. That the Korean electronics giant announced today.


The flagship TVs, the so-called SUHD TVs are equipped with the Internet of Things (IoT) hub technology, allowing them to be used as a controller for the entire smart house. Smart lights, thermostats and cameras can be controlled via the TV. These include Samsung devices, Smart Things more than 200 sensors, and devices that are compatible with the Smart Things-platform.
Through this platform, consumers can access all their smart devices via their smartphone or SUHD TV instead of having them operate individual apps through multiple separate apps. Users can for example choose to let messages from a motion sensor as pop up on the screen. The outside camera to the TV can be connected so you can see on the screen who is at the door.
Although all SUHD TVs get the Smart Things technology, the functionality is not yet available in all regions. By making all smart TVs IoT ready expects Samsung to strengthen its market position.
NEW