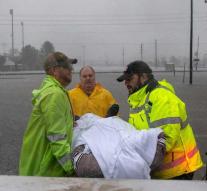 miami - The death toll due to hurricane Florence on the American east coast has risen to at least eleven. By the hurricane and by 'epic amounts of rain \u0026 quot; large parts of the southeastern coast of the US are flooded.

Chuck Watson, a disaster expert from a research institute in Georgia, said the damage could amount to about $ 20 billion (more than EUR 17 billion).

Marines, the coastguard and volunteers in helicopters, boats and vehicles have saved hundreds of people who were trapped by the water on Saturday. In North Carolina, the remaining residents have to take into account floods.

'If you refuse to leave during this compulsory evacuation, you must inform your legal neighbors, because the chance of dying is very present,' said Mayor Mitch Colvin of Fayetteville in North Carolina. 'The worst is yet to come.'

The passing of Florence was accompanied by heavy rainfall. Rivers came out of their banks and many fields of agricultural crops must be considered as lost. Larry Wooten, chairman of the agriculture office in North Carolina, said that half of the tobacco plants in the state were still in the field and 'basically has been destroyed, blown away'.

The National Hurricane Center in the US reported that Florence reached wind speeds of up to 75 kilometers at the end of the afternoon (Dutch time). At that moment the hurricane's eye was tens of miles west of Myrtle Beach in South Carolina. Respondents said that Florence was moving slowly westward.