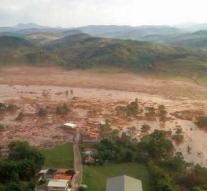 - Because of their role are 21 people indicted in the largest environmental disaster in Brazil due to manslaughter. That the PPS published in Belo Horizonte on Thursday. It concerns what is called the 'Tragedy of Mariana 'in the state of Minas Gerais.

On November 5, 2015 a dam broke into a collecting basin through an iron mine. Nineteen people thus died.

A massive wave of mud filled with pollutants flooded nearby villages and polluted the basin of the Rio Doce over a length of 650 kilometers. The gang ended up in the Atlantic Ocean. An estimated runaway 35 billion gallons of heavily polluted sediment.

The Samarco mine operator, part of the Brazilian company Vale and Australian-British company BHP, is irresponsible entrepreneurship accused. It was bought by a compensation of 5.7 billion euros.

The former director and several members of the management team, including six foreigners, must now stand trial because of willfully ignoring all warnings while they knew the dam was unstable. The maximum penalty is 54 years in prison.