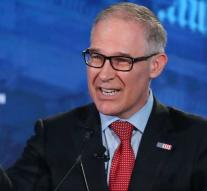 washington - The boss of the American Environmental Protection Service (EPA) must clear the field. Scott Pruitt filed his resignation after he came under fire because of a number of scandals. US President Donald Trump announced his resignation.

Pruitt became discredited, among other things, by having rented an apartment in Washington for a period of six months far below the market price. That was the property of the wife of a lobbyist for the energy sector. He is internally replaced by Andrew Wheeler.

Trump thanked Pruitt for his proven services. Since Trump became president, the chief of the environmental agency has reversed a number of environmental laws.