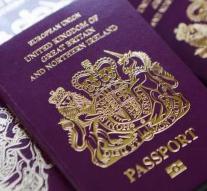 london - The United Kingdom deprives 150 jihadists and other criminals of British citizenship. The government is afraid that former citizens would come back to their homeland, collapsing as Islamic state, The Sunday Times writes. Even of jihad brothers, the nationality has decreased.

It is only about jihadists and criminals who also have a different nationality. According to international law, it is forbidden to make people stateless.

Islamic State (IS) is losing power in Iraq and Syria. Recently, Iraqi troops recaptured Mosul, the struggle for Syria Raqqa is ongoing.