Home / World / 'Enemies of the Christmas arrested in Venezuela 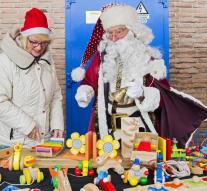 caracas - Venezuelan authorities have seized nearly four million toys. Also arrested the army according to the BBC two executives of the company that the goods would be withheld.

Venezuela's consumer watchdog accused Sundde a toy company of hoarding goods and push up prices in the run up to Christmas. The organization said it will not allow children to be 'deprived of the Christmas.

Sundde shared over the internet photos of two managers of the company Kreisel, which are removed by heavily armed soldiers. The watchdog came on Twitter with photos and video from thousands of seized boxes of toys.

The government had last week ordered companies to reduce prices for some products by about a third. Critics say it is a populist decision with major implications for businesses.

Venezuela is struggling with a deep economic crisis, which is partly caused by the low oil prices.