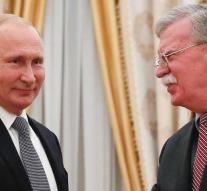 moscow - In order to make up for the stalled relations between the two countries, Russian President Vladimir Putin invited his American counterpart Donald Trump to sit down together in Paris next month.

The two leaders are in Paris on November 11 for the commemoration of the end of the First World War. The invitation was given to the US security adviser John Bolton on Tuesday from the Kremleader's mouth on the second day of his visit to Moscow, amidst a tension between Moscow and Washington because US President Donald Trump's plan to withdraw from a crucial nuclear disarmament treaty. According to Bolton, his boss will gladly accept the invitation.