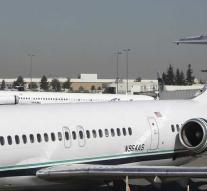 seattle - At the airport of the American city of Seattle an aviation officer took off with a passenger plane and crashed not much later. There were no people on board the aircraft according to the airport.

Sea-Tac Airport confirms that an employee has taken off unauthorized and that the aircraft has crashed into the water. It would be a Bombardier Q400 of presumably Alaska Airlines, with a capacity of about seventy passengers. The airline also does not think that other people were on the plane.

The American aviation authorities (FAA) can not confirm anything yet. 'We try to get accurate information about what is really going on. Without confirming anything, a stolen plane would be a security problem, 'says the FAA statement on Fox News.