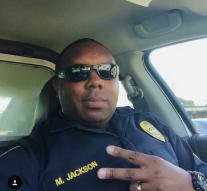 - Montrell Jackson (32), one of the three agents who Sunday was shot in the US city Batoun Rouge, reported a week an emotional message on Facebook for his death.

'I swear that I love this city, but I wonder if the city loves me. In my uniform I get dirty and spiteful glances, without my uniform some consider me as a threat,' Jackson wrote.

Jackson wrote the report after ten days ago in Batan Rouge a black man by police bullets was killed. Although Jackson in his own words 'physically and emotionally it was,' he promised not to give up. 'This city will and should be better. I'm on the street, so every protester, agent, friend, family member, or anyone else, when you see me and you need a hug or want to pray together, I'm here for you.'


The officer also reported that he finds it annoying that people who know him pull his integrity into question. Nevertheless, he remained optimistic: 'I pray for all those affected by this tragedy These are difficult times let the hatred not infect your heart...'

Jackson was slain Sunday along two other agents. The gunman, a former Marine, was slain by police. About his motive was still nothing known.