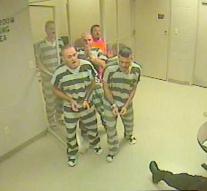 - That he survived a severe heart attack, the 52-year-old jailer Gary Grimm from Texas owes to a group of prisoners broke out to get help. More than two years after he looked dead in the eye, he took the opportunity to thank his rescuers. 'They could have left me too.'

Much of the moment he got the heart attack, Gary no longer knows. 'Suddenly I woke up at the First Aid', he tells local news channel WFAA.

He heard about what happened next. A group of prisoners who saw that the jailer was unconscious began to bang on the walls and bars to warn the other guards. If that does not work, they will be able to force a door for each other and draw the attention of the guards. They intervene.

Two years after the heroic deed, surveillance images emerge from the prison. When looking back, Gary becomes emotional. 'If they had wanted me to die, they could just have left me there,' said the grateful jailer, who is fighting his tears.

'Instead of taking my weapon, killing me or taking a hold, they treated me like a human being. 'And that's exactly how Gary himself does his job as a jailer. 'Whether it be junkies, fraudsters or child rapists- it remains people. It is not my job to judge about that. 'For that he wants to thank the prisoners. Because they were transferred during his hospital stay, he could not do that before.