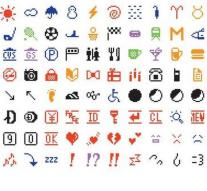 - The first emoji, the marks that adorn messages on WhatsApp and social media, by the MoMA, the Museum of Modern Art in New York, part of the collection. It is a set of 176 emoji, launched in 1999.

They were originally designed for a Japanese telecom provider and were designed to send messages to liven up with pagers. The set includes emoji now still exist- albeit in a somewhat primitive form. So to find the fist is, multiple hearts, constellations and the image of the smoking ban.

The Emoji are used around the turn of the century by companies that wanted to inform their customers as the example was bad weather, or to clarify a restaurant menu.