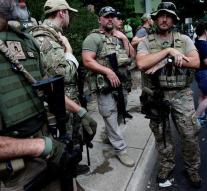 charlottesville - A large gathering of extreme right-wing protesters causes high-tension in the US city of Charlottesville (Virginia). The authorities have set emergency conditions on Saturday so that they can be taken quickly if needed.

Hundreds of nationalists, supporters of so-called 'alt-right' and neonazi's, fled across the university campus of the city on Friday night. They are angry with plans to remove a statue from General Robert E. Lee, the captain of the southern states in the American Civil War (1861-1865). Lets were called against among other things Jews, gays and immigrants.

On Saturday, the protesters met again for a march through the city. In advance, about six thousand participants were expected. Meanwhile, many counter demonstrators are also on their feet. Screenings were already visible between the two groups. Some protesters were injured, reported US media.