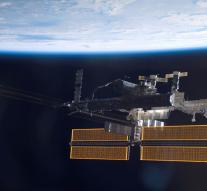 - Two US astronauts on Monday conducted emergency repairs to the exterior of the International Space Station (ISS). Scott Kelly and Tim Kopra had to put on their special suits for the spacewalk as a cart with a robotic arm it was blocked by another user and therefore was wrong 10 centimeters.

That problem was due this Wednesday have been resolved, because a Russian transport ship arrives with goods. The job itself was completed within a quarter of an hour: it was a matter of loosing a brake. In total, Kelly and Kopra spent about 3.5 hours outside. When they were still working on a spacewalk, they already perform preliminary work for new components that are installed on the ISS in the future.

Normally spacewalks months prepared. This time it was a matter of days.