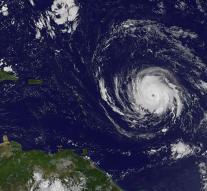 tallahassee - The governor of Florida, Rick Scott, has declared the state of emergency because of the hurricane Irma hurricane. Families need to rescue themselves, he says. The hurricane is also approaching the Antilles.

'Hurricane Irma is a life-threatening hurricane and Florida needs to get ready,' Scott says to a local television channel operating under the flag of CBS. 'The hurricane can potentially hit millions of people. In Florida, we always fear the worst, and hope for the best. '

The state of emergency must help to better cooperate different parts of the government. There is a lot of uncertainty with authorities. 'We do not know what the path of Irma is, but we can not afford to be unprepared,' said the governor. 'The best way to protect your family is to have a plan. '

The hurricane is heading for Florida, but will also ravage along Saint Maarten, Saint Eustatius and Saba. The US Consulate on Curacao warns tourists in the area for floods, mudflows and damage to homes.