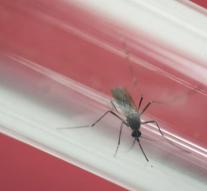 - Puerto Rico is a state of emergency declared by the widespread dissemination of the zikavirus,, represents a substantial threat 'to public health in the US territory. This was announced by the US Department of Health Friday (local time).

The virus rapidly spreads across the Caribbean archipelago where hundreds of pregnant women and their unborn babies at risk of getting infected. The governor of Puerto Rico requested the state of emergency, which the US State Department gives the opportunity to offer more support to Puerto Rico to fight the outbreak.

The authorities in Puerto Rico reported Friday that 10 690 officially identified cases of infection with zika are known. More than one thousand of them relate to pregnant women. Probably, the actual number of infections is higher, because many Puerto Ricans do not suffer from the symptoms associated with the virus and can not be tested by it.


People can suffer infected with zika to include mild fever, rash, pain in muscles and joints and fatigue. The symptoms may last two to seven days, but 80 percent of people who become infected with the virus have no problems.

So far in 55 countries and territories reported outbreaks of the virus, mostly in North and South America, according to the US Center for Disease Control and Prevention. Brazil is the hardest hit.