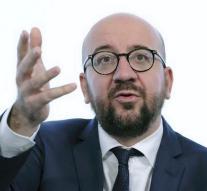 brussels - Prime Minister Charles Michel and Minister of Home Affairs Jan Jambon will still discuss Tuesday in a special crisis center on the incident in Brussels with involved politicians and police, army and intelligence representatives. That is what the newspaper De Standaard reports.

The magazine De Morgen writes that a trolley would have exploded on the station. Witnesses say that to have seen. Whether the shot man actually carried a belt over his waist, as was initially reported, is unclear.