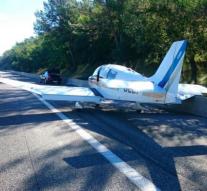 - Just like in the movie, but in real life. By engine problems a plane had to make an emergency landing on the highway near the southern French Brignoles.

A pilot came on the air in trouble on Tuesday morning and came to the conclusion that there is no other option than to make an emergency landing. The plane had two passengers on board when the crash landing occurred on the A8 motorway. There are no reports of injuries.