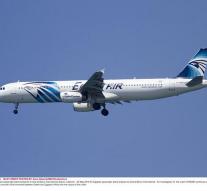 tashkent - A passenger plane of EgyptAir Wednesday made an emergency landing in Uzbekistan because of a bomb threat. The aircraft was en route from Cairo to Beijing. All 118 passengers and seventeen crew have safely left the plane.


The incident comes less than a month after flight MS804 EgyptAir above sea disappeared during a flight from Paris to Cairo. The investigation into that crash is ongoing, but a terrorist attack is considered to be one of the possibilities behind the tragedy.