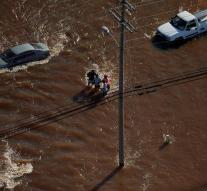 - US President Barack Obama on Monday declared a state of emergency for the state of North Carolina because of the damage Hurricane Matthew has done, reports the White House.

By the imposition of emergency rule come under other federal organizations into action. Last Thursday, Obama called even though a state of emergency for the states of Florida and South Carolina, when Matthew had yet to reach the mainland.

According to CNN in the US at least twenty people have been killed by the storm. Eleven people died in North Carolina.