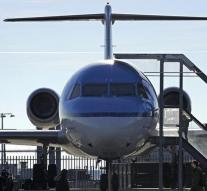 perth - More than a hundred passengers on Friday at Perth airport a plane of the Australian company Qantas after landing must leave via the emergency slides. The emergency evacuation of the Fokker 100 was taken after the crew detected smoke was in the cabin.

Qantas announced that all 97 passengers and five crew members were safe. Newspaper Western Australia Today website reported that two people were taken to hospital by ambulance.

The unit came from the mining town of Newman. Technicians examine the aircraft to determine the cause of the smoke.