Home / World / Emergency cry: 'It's all for themselves now' 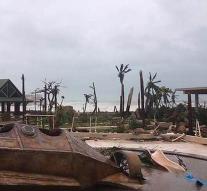 amsterdam - Dutch lawyer Lucas Berman has sent an emergency call to his family. 'It seems The Walking Dead, in real, but without zombies. Everyone is protecting themselves in small teams with machettes where you usually cut your garden, not to be robbed. '

'It's not safe here. Everywhere is being plundered. Groups of people are jatting. Those armed: some with firearms, others with knives. 'According to Berman, there is no authority left from the government. Security services are missing. 'It's all for themselves now. There are far too few marines. Hundreds are being sent, but there must be thousands. '

Berman expresses concern in the audio message that The Telegraaf received through his family. There is a big shortage, to everything actually. 'There must be goods. Plates, screws, to close houses so that the normal course of operation can begin. And people who can manage. Those are not there. A few maybe, but they are loyal. '

In addition, current is a problem. According to Berman, diesel is needed in the first days. 'Everyone is on his generator. It has a couple of days diesel, but after that it's on. It is very important that diesel comes, so that people have electricity. '

Finally, Berman says, communication must be restored. 'A radio tower must be installed- by the marines, the army or the government- so instructions can be given on the island. Nobody knows what's happening. Occasionally, the internet works, but a lot of people do not have any phone anymore. They can only listen to a radio in their car. If it does. '