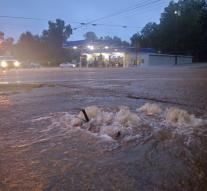 After two days of heavy rain saw the governor of Louisiana, John Bel Edwards, exclaiming forced the emergency. As a result, schools, government buildings and many roads were closed. There is a curfew.

The US National Weather Service has issued a warning for the weekend for flooding in parts of southern Mississippi and southeastern Louisiana, including New Orleans.


In March, led flooding in the same area to four deaths and thousands of damaged homes.