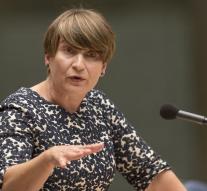 The government of Macedonia had asked for help. These include for intubatiesets, oxygen masks, blood pressure monitors, insulation blankets, tourniquets, and connect material. The charge has a value of over half a million.

,, The havoc in a number of areas so large that there is a shortage of medical supplies. It is therefore important to get that short-term spot, so that the situation does not deteriorate further, '' said Ploumen.


The Dutch water expert Peter Glerum leads the European team which maps the situation in the Balkan country. Because of the flood, more than twenty people died.