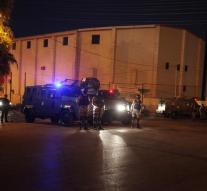 jerusalem - Israeli embassy workers in Jordan returned to Israel on Monday evening, announced the office of Prime Minister Netanyahu. Among them is also the security officer involved in a shooting incident in the embassy, ​​causing two Jordanians to die.

What has just been played in the embassy is not entirely clear. According to local media, two men had invaded the building and one of them attacked an embassy worker with a knife. The security officer shot down the men. One died on the spot, the other later in a hospital.

The incident continued to test the already tense relations between Israel and Jordan. Jordan wanted to interrogate the security guard about the incident, but Israel did not allow it because he had diplomatic immunity.