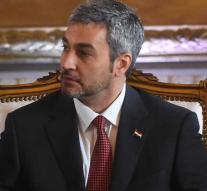 asunción - Paraguay moves its embassy in Israel back from Jerusalem to Tel Aviv. The government of the new president Mario Abdo Benítez finds the decision of the predecessor of Abdo, Horacio Cartes, unwise and undiplomatic.

The South American country moved the embassy to Jerusalem in May. And Cartes himself went there to open the new mission festively, together with Prime Minister Benjamin Netanyahu. But at the time, criticism from, among others, Abdo sounded that Cartes was operating a foreign policy on his own that was damaging relations with both Israel and Arab countries.

Cartes then retired with the United States, who announced that they would establish the embassy in Jerusalem. However, the move of the American embassy has been put on hold for six months at the beginning of June.

The Paraguayan Foreign Minister, Luis Alberto Castiglioni, confirmed on Wednesday that the embassy is leaving Jerusalem again. Israel reacted angrily by recalling his ambassador from Asunción and said to close the embassy in Paraguay.

For the international community, including Palestine, Jerusalem plays a key role in achieving peace between Israelis and Palestinians. The Arab east of the city should become the capital of Palestine. But Israel has conquered and occupied East Jerusalem. Since 1980, Israel has called the entire city its own capital. The international community does not recognize that because it blocks peace. That is why there are practically no embassies in Jerusalem. The Netherlands moved the embassy to Tel Aviv in 1980.