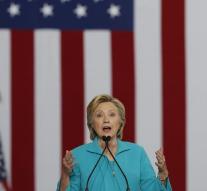 - The US State Department later than September 13 should make public all emails during the week of the attack on the US consulate in Libya's Benghazi in 2012 were exchanged by the then Secretary of State Hillary Clinton and the White House. This has given a federal court in Florida on Thursday.

The ruling is a victory for the conservative watchdog Judicial Watch. Who wants all emails sent Clinton during her term as Minister of Foreign Affairs and received shall be made public before the presidential election on 8 November.

Earlier this month, the FBI handed over nearly 15 000 e-mails and other documents about the attack in Benghazi to the Ministry. According to the investigative Clinton had this not been transferred to her former employer.


In 2015, the FBI launched an investigation after the service had discovered that Clinton in her time as Foreign Minister from 2009 to 2013, including confidential information from the government through her personal e-mail received and sent. For security reasons, they had the minister must use a public email address. According to him, the Democratic presidential candidate did not know her emails contain confidential information.

Its spokesmen have not yet responded to the ruling by the federal court.

During the attack on the consulate in the Libyan coastal city were four Americans killed, including Ambassador Chris Stevens. Republicans have been trying for years to put Clinton personally responsible for the attack, despite the absence of any proof of this.