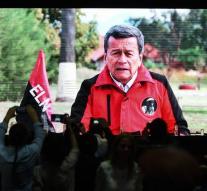 bogota - The Colombian guerrilla movement ELN killed a Russian man in April, who was hostage by the group for six months. According to the National Liberation Army (ELN), who released the news himself, he tried to escape.

Arsen Voskanyan was abducted in November. According to a commander of the Marxist ELN in the Colombian jungle, he would be looking for poisonous frogs.

When he tried to flee after long imprisonment and grabbed a hand grenade, he was shot dead, said the commander. The grenade went off and injured several fighters.

ELN follows the FARC peace talks with the Colombian government.