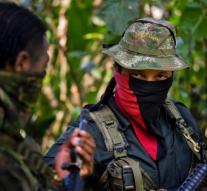 bogota - The small extremist guerrilla movement ELN (National Liberation Army) investigates the disappearance of two Dutch programmakers in the Catatumbo region, in northern Colombia. The ELN reported this on the internet without confirming that the two were in power of the group, Colombian media reported Tuesday. ELN proposes to 'clarify this case' in the message.

The Colombian Armed Forces currently assume that Derk Bolt and Eugenio Follender of the railroad program (KRO / NCRV) were abducted last Saturday north of El Tarra. That would have happened to Filo de Gringo and their abductors would be members of an ELN called the Front Héctor.

The Dutch ambassador to Colombia, Jeroen Roodenburg, went to the north of the country to report, according to Colombian media.