Home / World / Elizabeth does not put a wreath on commemoration 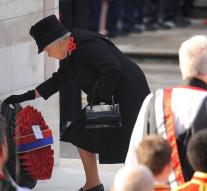 - The British Queen Elizabeth II does not put a wreath on Remembrance Sunday this day, traditionally celebrating British warriors in the First and Second World War. Elizabeth and her husband, Prince Philip, will marry the ceremony from Buckingham Palace's balcony, British media reports.

Prince Charles observes the honors and puts a wreath on his mother's behalf. As a reason for the striking decision, Buckingham Palace calls the age of the queen. Elizabeth II has now been 91 years old and has now been 65 years old on the throne high in the list of longest-standing monarchs ever.

Prince Philip (96) left his public performances earlier this year because of the sense of age. The decision will feed rumors that Elizabeth may think of retiring.

The British princess missed only six times the wreath laying on Remembrance Sunday in the past 65 years. Four times because she was visiting abroad, twice because she was pregnant.