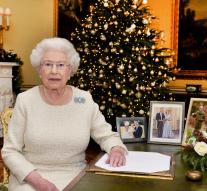 london - The world is this year facing various 'black days', but the holidays are a perfect time 'to think of all the things we are thankful for.' That tells Britain's Queen Elizabeth Friday during her Christmas speech. That is noon broadcast on radio and television, but all BBC quotes from the speech.

It is often sung carols: The light shines in the darkness, but the darkness has not won , Elizabeth, which further inter alia, the thank those love and bring joy into our lives .

Last year was celebrated that World War II ended seventy years ago. Elizabeth thanks, as she did before, everyone who has a stake in ending that war.