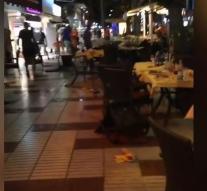 - During the panic that broke out Tuesday night by a flash mob in the Spanish resort of Platja d'Aro eleven people were injured. Two of the victims were taken to hospital. Police have arrested five German women.

The arrested women are between 20 and 25 years old. The instigators had tripods and selfiesticks with them that were regarded as weapons. The women pretended they had spotted a celebrity they like real paparazzi were chasing.

Out of nowhere, the women would have started running and screaming. As bystanders thought it was an attack, there was panic. Hundreds of people were trying to find a safe place. In their flight fell patio furniture and windows.


Women who have been detained suspected of disturbing public order. They must appear in court later today.

A flash mob is a group of people who assemble suddenly in a public place, do something unusual and then quickly falls apart again. Flash mobs are often organized through social media.