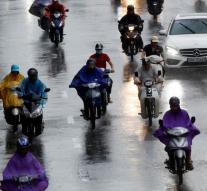 - Floods, landslides, fallen trees and collapsing houses are definitely came eleven people dead in the last weekend in northern Vietnam during a typhoon. Eight others were injured. Under Vietnamese disaster relief almost 2,000 homes were damaged.

Another typhoon reached Monday Japan. In the regions of Tokyo and Tokai train services were halted. Also were canceled over four hundred flights. In the storm were measured wind speeds of over 180 kilometers per hour.