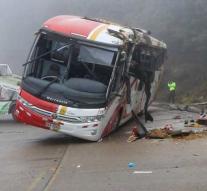 quito - In a bus accident in the Andes mountains in Ecuador at least eleven people were killed. Among the dead is a baby of less than a year old. In addition, at least 37 people were injured, reports the Ecuadorian newspaper El Universo.

The accident happened 20 kilometers south of the city of Cuinca on the highway towards Luja. The exact cause of the accident is not known, but according to a survivor, the bus driver drove too hard. On pictures you can see that the bus is on its side.