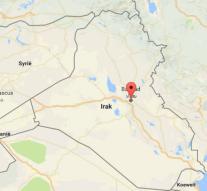 baghdad - Certainly eleven babies were killed Wednesday when a fire broke out at a hospital in Baghdad. CNN reports that, according to the Iraqi Ministry of Health.

The fire broke out in the maternity ward of the Yarmouk hospital in western Baghdad. For eleven newborns all help came too late. They died of asphyxiation. Seven other children and 29 women were rescued and transferred to another hospital in the Iraqi capital.