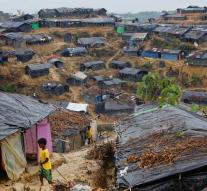 cox's bazar - Certainly two Rohingya refugees were killed in wildlife in Bangladesh. The animals stormed the police at night by an improvised refugee camp in the Cox's Bazar district.

The victims are a two-year-old child and a 55-year-old man. 'There are elephants in the woods, close to the place where many Rohingya refugees release forest areas to build cabins,' said a police spokesman. The elephants who performed the fatal attack later entered the forest again. It is unclear how many animals it went.

The two victims reportedly spent the night on a hill. Many refugees from Myanmar are forced to sleep in the open air. Catch camps are often crowded because hundreds of thousands of Rohingya Muslims from Myanmar have crossed the border in a short space of time.

The Bangladeshi weather office warned Monday for heavy monsoon rain in the Cox's Bazar district, where many refugees were perched. The emergency weather can further worsen the humanitarian crisis in the area. The first showers have fallen in recent days.