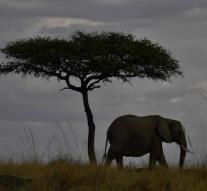 - A Belgian man has been killed in the famous Maasai Mara National Park in Kenya when he was trampled by an elephant. Last month, even though an Italian trampled to death when he tried to take a picture.

The Belgian was seriously injured and died at a nearby medical center to his injuries, Het Laatste Nieuws reported on the basis of an anonymous police officer. The identity of the Belgian is not known.

According to local media elephants abandoned by the drought their natural habitat in search of food, so they often come into contact with the locals. So this week was a child trampled when it was on the way to school.