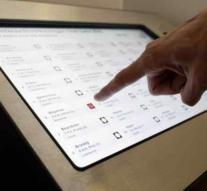 the hague - In order to allow electronic voting in elections, an investment of between 260 and 365 million euros is required. That has been written to the Dutch Parliament by Minister Ronald Plasterk (Interior Affairs).

This only involves investment costs for the supplier. In addition, for the government, a number of costs for the procurement, guidance and control of device development and expertise build up, according to the governor.

This is evidenced by a study by the Electoral Voting and Counseling Committee in the polling station (Van Beek committee). In 2014, the commission estimated the investment costs between 150 and 250 million euros.

The municipalities do not feel like electronic voting. They call for a new model (paper) ballot paper that can be counted electronically. A new cabinet must eventually make a decision.