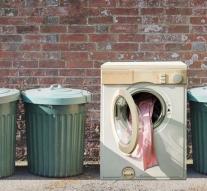 - Although half of the Dutch ashamed when an electrical appliance throw in the trash, it still happens regularly. Four in ten say here sometimes to blame.

by The intention, however, to recycle is there. Nearly nine in ten Dutch indicates that we must strive to recycle all electrical appliances. According to a survey by Samsung that a campaign launched to further promote recycling. Five percent of respondents admit they sometimes have an electrical appliance with a neighbor dumped. Remarkably, 11 percent said they sometimes have an electrical appliance of the neighbors in their trash found. To promote recycling Samsung gives people until December 6 to hand an old appliance at the store discount on new equipment from Samsung. The electronics company is working for the campaign along with foundation Wecycle.
NEW