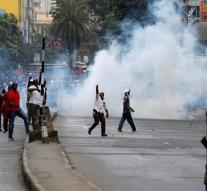 nairobi - The Kenyan electoral council has put the names of eight presidential candidates on the polling ballot on 26 October. Apart from the favorite Uhuru Kenyatta, the main opposition leader Raila Odinga is also on. He said he did not participate because he thinks it will not be fair again. Apparently he has not yet submitted the official papers for his withdrawal.

The Supreme Court judged after Odinga had filed a complaint that the ballot box showed irregularities in August and canceled the result. After Odinga's unsubscribe, Kenyatta seemed to have a second term without any resistance.

Politician Ekuru Aukot, who did not get 1 percent of the votes two months ago, went to court to enforce a resignation and got the same day on Wednesday. Legally speaking, there is a new election and not a second round between the two candidates with the most votes. All eight who participated then come back on the form again.