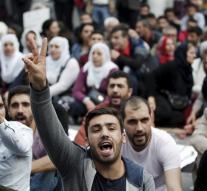 ankara - The parliamentary elections in November in Turkey continue as usual , delay is not an option . However, the security is increased considerably after the attacks on Saturday in which 95 people were killed . That is what the Turkish authorities reported Sunday .