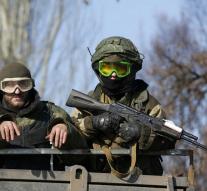 donetsk - The pro-Russian separatists in eastern Ukraine have postponed their disputed elections until March 20 next year. The leader of the so-called Donetsk People's Republic , Aleksander Sagartsjenko has it said Friday.

The separatists wanted on 18 October to the polls for general elections.

That was contrary to the treaty of Minsk. Under international pressure, they have postponed it.