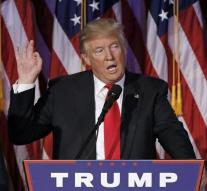 brussels - The election of Donald Trump for president of the United States is a nightmare scenario come true for Europe. After earlier this year Brexit this is another huge blow to the EU.

It means that ignites an uncertain time, because the Republican has revealed himself as extremely erratic and pulls about anything to.

With Trump in the White House, the United States faces a new era of protectionism. At least that is the expectation when all his plans in recent months really going to be a reality. He wants to protect America by pulling on high import tariffs, although this will be disastrous, according to many economists and hundreds of thousands of jobs cost in the US itself.

For Europe means bad news. A recession that has consequences here. But what additionally plays that trade policy between the EU and the US under Trump will be very difficult. His presidency marks the end of TTIP, which is already under heavy fire.

Much more concrete is the threat of Russian aggression. Trump has openly security guarantees that are the basis of NATO cooperation put at risk by declaring that America under his leadership will not automatically come to the rescue when an ally is attacked.

Trump wants to see money from the Europeans who spend too little on their defenses. A fair question, but there crosslinking of security guarantees he has brought in an unprecedented way now for a diplomatic mess. Belong to NATO in Brussels them President Putin already laughing up his sleeve. Poland and the Baltic states are themselves blankly startled.\n  \n  \n   advertisement

Much of what has been said Trump last election campaign might be stripped of his sharpest edges. He has to deal with a Congress that is spineless and ends up in a government bureaucracy that can bend subtly in silence.

But what particular concerns in Brussels as capital of Europe trumps total unpredictability and levity with which he thunders over the diplomatic chessboard. Now it will have to be found a mode of cooperation. What no one yet knows.