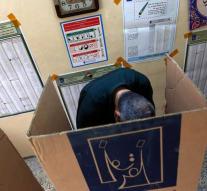 baghdad - The first hours of the parliamentary elections in Iraq went quietly. Staatsmedia reported that no major incidents occurred until noon.

There were complaints from Fallujah, a city west of Baghdad where former dictator Saddam Hussein had a lot of support. Residents of Fallujah said that due to technical problems they could not cast their vote. In a neighborhood in the northern city of Mosul, residents complained that they had to walk for an hour to vote.

In the parliamentary elections on Saturday, 329 parliamentary seats are at stake. There are approximately 7,000 candidates for this.

According to the polls, the Shiite alliance of Prime Minister Haider al-Abadi presumably gets the most seats in parliament, even though many Iraqis blame the head of government for not having succeeded in getting the economy out of the doldrums. Abadi claims that under his leadership the terrorist group Islamic State (IS) has been defeated.

The two main challengers of Abadi are the former Prime Minister Nuri al-Maliki and the militia leader Hadi al-Amiri. Like Abadi they are Shiites. Of the three candidates Amiri has the strongest ties with Iran.

The authorities have deployed tens of thousands of security personnel because attacks are being taken by IS.