Home / World / Elderly woman sat in a chair for years, daughter gets a cell sentence 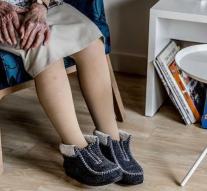 staffordshire - A woman from the English county of Staffordshire has left her 86-year-old mother in a chair for a year. The elderly woman died from the consequences of neglect and inflammation. The 68-year-old daughter has been given a suspended prison sentence of 20 months.

Doreen Shuflebotham suffered from severe physical complaints in the months before she died, the judge says in Stafford.

Shufflebotham died on September 6 in 2016 after her physical symptoms had worsened, writes The Guardian. She had a fracture in her thigh that had been infected, she was suffering from pulmonary embolism, blood poisoning, thrombosis and acute bacterial meningitis, states the Staffordshire police.

'Medical experts have estimated that Doreen has not moved for her death for eight to twelve months,' police said.

Linda Farr was arrested three days after the death of her mother. Shortly afterwards she was charged. Meanwhile, Farr has also known that she has seriously neglected her mother.