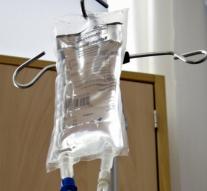 - A 78-year-old man Sunday morning in a German clinic attacked a nurse and four patients.

The elderly man began suddenly and unexpectedly in the hospital Karlsberg in Greifswald store with an IV pole in a 26-year-old nurse, said police Neubrandenburg.

She's a patient room in it. The man had followed her and was there present three patients aged 70, 72 and 76 years. In the next room, he began to strike in again on a 56-year-old patient.

Alerted by cries other nurses managed to overpower the man eventually. The injured needed medical help, two patients had fractures. According to police, the attacker wrong in a psychological state of emergency. The hospital Karlsburg is a center for heart and diabetes patients.