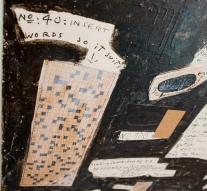 - It was intended as a work of art, a crossword puzzle fullscreen that hung in the Neues Museum in the German city of Nuremberg on the wall. A nonagenarian visitor went feat fearlessly attacked with a ballpoint pen and filled with neat block letters several words in the puzzle.

Justice investigated the matter and decided after careful consideration to dismiss. What counted was that the museum had not insisted on a penalty. The elderly woman also had no criminal record. The nonagenarian in July was part of a group of elderly visitors. At the top of the work of Arthur Köpcke was inviting text 'enter words. And so did the woman.

The artwork is private property, and was loaned and insured for 80 000.