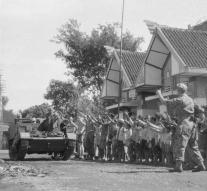 the hague - The argued and argued Indonesian Yaseman tortured by the Dutch army was heard on Friday by a court in The Hague via a video link. It is a unique matter.

The man says to be tortured in 1947 so he would confess that he was fighting the Dutch rule. He would have been given electric shocks with a field phone, after being caught on Java in former Dutch-India. The commitment is a compensation.

The judges asked him what he had exactly experienced, where and by whom. The elderly man suffered from how he got the shocks. He raised the finger that was attached to the cable 70 years ago, resumed the sound of the electricity and moved as if he felt the shocks.

Over his age some uncertainty arose. At the question of the judges if he is 89, he answered: 'Too little, 100!'.

The judges said before hearing Yaseman that, according to them, it is the first time in a civil case that someone has been heard through Skype in this way. It is also the only Indonesian affair that is about torture. Most are for executions and damages for survivors.

Also Yasemans sister, Sapatun, is being asked by the judges on Friday.