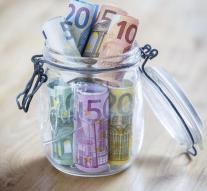 stekene - An elderly couple from the Flemish city of Stekene accidentally threw 32,000 euros on Saturday. The money was hidden in flower pots.

The elderly clashed their savings in envelopes and bags in the pots for years. The man, a little forgetful, decided to dump the pots in a container for 'hard plastic' on Saturday. His wife noticed the mistake a day later, writes HLN. pray. In order for her to go, she stepped to the police, indicating that she had to seek contact with the waste collector.

The container appeared to have not been drained, after which four men decided to search the container. After an hour, the couple got good news: the full sum was recovered. The couple wanted to thank the employees by giving them some money, but they refused the men. 'We're glad we could help them. They can undoubtedly use the money themselves. '

How the elderly hide the money from now on is not known.