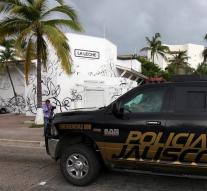 - Among the people who have been abducted from a posh restaurant in the popular Mexican resort of Puerto Vallarta is possibly a son of the notorious drug lord Joaquín Guzmán, alias El Chapo. Iván Guzmán or indeed among the victims, is unclear because in the establishment of false identity documents were found, said the Attorney General of the state of Jalisco on Tuesday.

Eight armed men abducted Monday six or seven suspected members of the notorious Sinaloa drug cartel in the restaurant in the center of Puerto Vallarta. The cartel was led by El Chapo, was arrested again but escaped from prison last year. In January, the police managed to catch him again in the head.

Puerto Vallarta is located on the Pacific Ocean, is the scope of the Jalisco New Generation Cartel. This gang is becoming more powerful in recent years.

The son of drug kingpin Joaquin 'El Chapo' Guzmán (photo) is possible under the abductees.